In the Museo di Storia della Scienza, Florence there is an elaborate table clock, monogrammed CR, which Leopold determined to be a masterpiece from Nuremberg made before 1570. A so-called mirror clock (in the form of a hand mirror) with the same monogram is in the Metropolitan Mus. of Art New York, the dial shows astronomical data, the calendar begins with 1570. Another clock with the monogram CR and a calendar from 1572 is in the Württ. Landesmuseum. The monogram would fit Reinmund, but also the solder Claus Rheinla. Reinmund's daughter Maria married the painter Hans Weyer the Elder on 20.5.1601.

(quoted from the Nuremberg Künstlerlexikon, edited by Manfred H. Grieb) 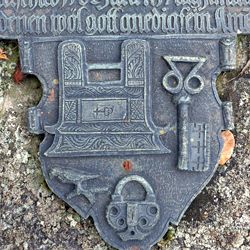