The contractor for the reredos was a picture carver, a rather unusual procedure in Nuremberg. With the exception of an amount paid directly to the painter of the predella backs in 1516, all payments were made to a "meyster Jorge" (1508), "meister Jorge pildschnizer" (1509), "Jorg pildschizer" (1513) or "pildschnizer", as he is succinctly referred to in the final payment in 1518. According to this, he was not only the executing carver, but also the general contractor responsible for subcontracting the other trades (Stefan Roller: Hans von Kulmbach und der Nürnberger Bildschnitzer Meister Jörg, in Renaissance in Franken, Hans von Kulmbach und die Kunst um Dürer, 2022, p. 105).

It is possible that Herb came from Lauf, where his brother Martin lived; on 28.3.1519 the latter acknowledged to Apollonia, the widow of the carver, that he had received some clothing. Nördlingen could also be the place of origin, since Endres Paumgartner, a clothier from Nördlingen, acknowledged Herb's widow, who had meanwhile remarried Bernhardin Hamerschlag, on 11.4.1520 for the receipt of two gulden, which Jörg Herb had bequeathed to his children.

"Thus, with Georg Herb we could be looking at one of the most important carvers of the Dürer period in Nuremberg, who becomes archivally tangible between 1503 and 1518. Some of the objects created in his workshop, such as the Bruck high altar, the Annenretabel, the Kleine Pietà and not least the crucifix in St. Jobst and the Nuremberg Madonna, are among the best that Nuremberg sculpture of this period has left behind." (Stefan Roller, Hans von Kulmbach und der Nürnberger Bildschnitzer Meister Jörg, in: Renaissance in Franken. Hans von Kulmbach and the Art around Dürer, 2022, p.123). 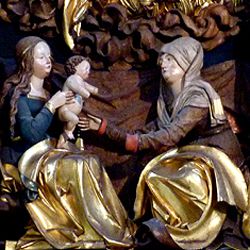 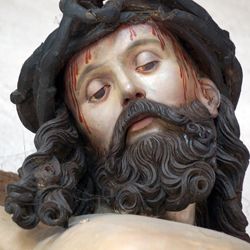 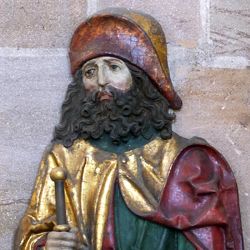