Son of Albrecht II, redsmith, ∞ I) 6.3.1593 Anna (buried 24.11.1612), widow of Peter Pingen, English cloth maker; II) 26.4.1613 Catharina (buried 4.11.1635), daughter of Mag. Christoph Finster, chaplain in Hilpoltstein. 1596 master. He was the leading maker of epitaphs in Nuremberg at his time, the production of which was reserved for a few founders. He worked for all classes of the population, for craftsmen, merchants, the Nuremberg patriciate, for canons in Bamberg and for the barons of Rotenhan in Rentweinsdorf. In the early period he used the formal language of the late Renaissance, but soon changed to the style of the early Baroque. His work is characterised by care, neatness and high technical skill. The varied accessories included scrollwork, flowers, fruits, leaf volutes, putti, the genius of death, skulls with snakes, angels, winged angel heads, allegories of faith and hope as well as religious representations. In addition, there were coats of arms, scriptural tablets and Bible verses. He made the designs and models for his castings himself. He was also the first master to sign his works with his initials I. W. or with his full name. On 8.12.1622 he acquired the rights for his own grave no. 1561 in the Johannis cemetery for 15 fl. and added an inscription and coat of arms cartouche, dat. 1622. 1622. he lived in the Fischergasse.

(quoted from the Nuremberg Künstlerlexikon, edited by Manfred H. Grieb). 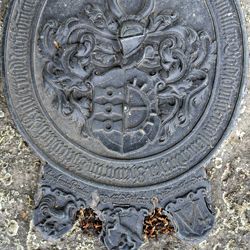