From 1939 to 1944 he lived in Königsberg where hebecame a member of the Confessing Church and the YMCA. In 1945 he becomes a soldier. After being a Prisoner of War be graduated from High School in Tübingen He studied medicine until 1947  and then art history in Tübingen.

After self-taught studies in painting and drawing, he studied sculpture at the Stuttgart Art Academy from 1952 to 1956.

At the same time, he completed an apprenticeship as a bronze caster using the lost-wax casting method and passed the journeyman's examination.

From 1956 Jürgen Weber worked as a freelance artist in Stuttgart and Rome. In 1960 he was awarded the Rome scholarship of the Villa Massimo.

In 1961 he was appointed professor for "Modelling and Nude Drawing" at the Technical University of Braunschweig, which he transformed into the "Institute for Elementary Forming".

In 1978 he was elected a corresponding member of the Academy of Arts of the GDR.

In 2000 Jürgen Weber relinquishes the directorship of the institute and in 2007 he dies unexpectedly in Ibiza in his holiday home. 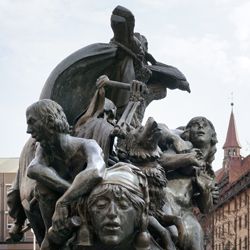 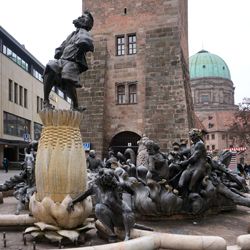